Mr. Robert E. McCann Jr, born January 3, 1926 in Pittsburgh, Pennsylvania, became a Georgia resident in 1953 until his passing October 17, 2020. A long-time resident of Sandy Springs, Georgia, “Bob” and his wife Maude lovingly reared five children: Bobby, David, Jeff, Mark, and Mary. The couple were active at North Atlanta Bible Chapel for decades, and after Maude’s passing, Bob became a deacon at First Baptist of Sandy Springs. Bob’s interests included reading his Bible, traveling in his RV, creating art portraits and landscaping, and singing in his church’s choir; but his most monumental work in his eyes was doting on his grandchildren and later his great grandchildren all of which were the collective apple of his eye – whether they lived nearby or hundreds of miles away. His gentle spirit, warm smile, and enduring faith in His Savior were the hallmarks of his person. His integrity, uplifting spirit, and genuine concern for others, marked his Christian faith. All the family relished his repeated well-worn jokes and humorous songs such as the grandchildren’s favorite ditty about bedbugs playing baseball. He brought smiles to the young and old alike. Bob McCann was a genuine example of the believer in word and truth.

Bob grew up during the Great Depression and that era made an indelible mark on his strong work ethic. His parents struggled to make ends meet and Bob would recount how as a child he had to stuff cardboard in his shoes to block out the frigid Pennsylvania winters. He went on to temporarily drop out of high school to serve his country in the U.S. Navy during World War II. While still a teenager, Mr. McCann found himself as the coxswain in charge of a Higgins landing craft taking the U.S. Marines onto the beaches at Iwo Jima under enemy fire. While his landing craft was beached, he witnessed the now iconic scene of Marines hosting the American flag on Mount Suribachi and he recounted how the distant ships horns blew in celebration. Bob would later attend the 60th anniversary of the Invasion of Iwo Jima on the island itself and could point out where his boat hit the beaches multiple times. He did not speak much of the war in his younger years, but as he aged, he revealed to a grandson that he helped to shoot down a kamikaze that was attempting to hit his ship at the Battle of Okinawa. After the war, Bob went to art school and begin his career as a technical illustrator before landing a position at Lockheed Aircraft in Marietta where he was an engineer until his retirement in 1984. His work ethic was noted, and he was recognized as “Engineer of the Year” in 1964 at Lockheed.

Despite the often-overwhelming hardships of life from the era of the Great Depression through the era of COVID, his smile and kind ways were a constant reminder of his genuine trust in the Savior that he so dearly loved. His family believes that when he entered the kingdom, he heard the words of his Lord, “Well done, good and faithful servant.” To our father, grandfather, and great grandfather, “Well done, indeed.” We will miss you every day, Papa, until we see you in His Kingdom.

A gravesite service for family will be held 1:00 PM, October 21, 2020 at Arlington Memorial in Sandy Springs, Georgia. In lieu of flowers, donations may be made in his memory to Catoctin Bible Church of Lovettsville, Virginia; North Atlanta Bible Chapel of Doraville, Georgia; or First Baptist of Sandy Springs of Atlanta, Georgia. 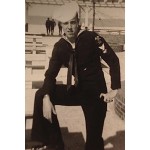