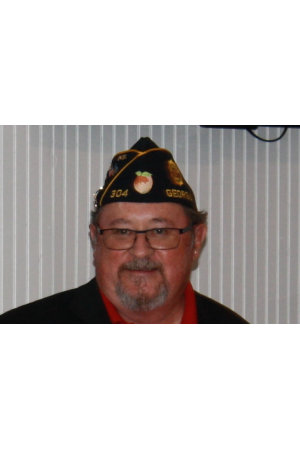 There once was a man from Nantucket…But seriously, about the life of Ronald Ward Asby...

Ron was born and raised in Kansas City, Missouri, to Basil and Sue Asby, and was the oldest of five children.  He obtained the rank of Eagle Scout in 1962.  Ron enlisted in the United States Navy, serving from 1967-1973.  He was stationed out of Norfolk, VA on the USS Forrestal CVA-59. In the middle of his military service he married his high school sweetheart and the love of his life, Lynda Hall, on August 8, 1970.

After his military service, Ron received his Bachelor’s of Business Administration Degree from the University of Missouri-Kansas City in 1975. He was very involved with his children and their various activities, as well as in his church.  He joined the American Legion Post 304 in 2006 and became a very active member, serving as Commander from 2012-2016.  He continued to be active as the Past Commander of Post 304, as well as serving within the 5th District of the American Legion of Georgia.  More recently Ron became involved with the Kennesaw Business Association, Acworth Business Association, and Acworth Downtown Development Authority; which allowed him to express his love for his community.

Ron passed away peacefully on August 6, 2017, surrounded by his wife and four children.  He is preceded in death by his parents and his beloved sister Judy “Toodles” Asby.  He is survived by his loving wife of 47 years, Lynda; children Stacy (Christopher) Robinson, Shari (Matthew) Tate, Suzanne (Michael) Brower, Benjamin (Ghost); a motley crew of grandchildren:  Vallei, Kelsey, Eli, Nathan, Eva, Scotty, Gavin, Laurel; siblings Dave, Becky, Tim; a multitude of nieces, nephews, great nieces, and great nephews, all of whom he dearly loved.

He will be greatly missed by everyone who knew him.