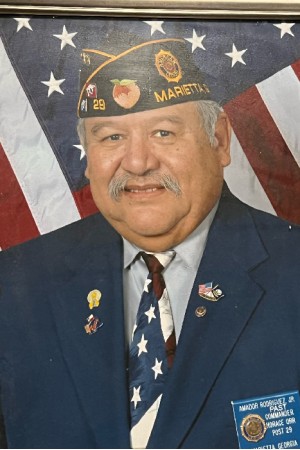 Amador was born on February 12, 1948, to Amador Sr. Rodriguez and Guadalupe Rodriguez in Encinal Texas. After Amador graduated from Nixon High School in 1966,  he went on to study Allied Health at Laredo Junior College and graduated in May of 1974.

After graduating with a degree in Allied Health, he started his career in the United States Navy as a Corpsman and a Preventive Medicine Technician. In his time in the Navy, he got to travel the world being stationed in Okinawa Japan, Guam, and Oakland California just to name a few with  his  beloved wife Maria Teresa Rodriguez as well as his two children that joined them along the way. After serving in the United States Navy for 25 years, Amador Rodriguez JR retired as Chief Petty Officer in May of 1995. Soon after retiring from the navy,  he started working with Tricare for life in the military base in Atlanta GA where he went on to help many people such as marines and sailors. Amador spent another 10 years serving his time to soldiers and just anyone in need of his help before officially retiring in 2005. He then went on with the rest of his life spending time with his family and friends telling jokes and putting joy in people's hearts and smiles on their faces.

In 1970, Amador met Maria Teresa while she was a student nurse at the hospital he was working at. They got married on December 22, 1973. Amador and Maria went on to have two children, Amador III (Nuno) and Angelica (Angie). Amador and Maria Rodriguez were happily married for 48 years.

Mr. Rodriguez will be buried at Georgia National Cemetery following the funeral.

Shelley Maldonado Garcia On Dec 10 2022 at 6am
My Mother (Lile Maldonado) Would like the family to know you are in our prayers as you go through this difficult time. May flights of angels lead you to thy rest. RIP Primo Reply to this comment
Shane Clark On Dec 07 2022 at 12pm
Our paths crossed in the 1980s when my dad was stationed in Corpus Christi. Amadore was my first little league coach. Never the fastest kid on the team I can still hear his booming voice yelling “Andale Shoon Andale”. Rest easy Coach. Reply to this comment
Angie Gulley On Dec 07 2022 at 8am
I did not know him but his son is an employee of ours. Nuno is a testament of a great man raising him. Our thoughts our with his family at this heartbreaking time Reply to this comment
Armando Rodriguez On Dec 07 2022 at 8am
I will miss my brother. He was a great brother to have and was always there for me when i needed him will never forget him. Love you! Reply to this comment
Showing 1 to 4 of 4 (1 Pages)