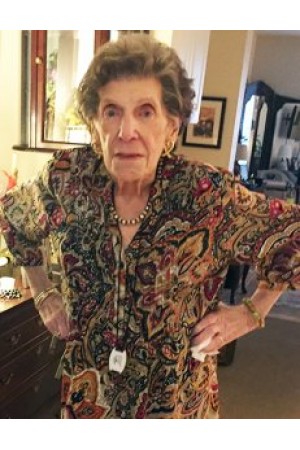 Emily Bell McNally, a Mobile native and long-time resident of Mobile, Alabama, and Atlanta, Georgia, died in Marietta, Georgia, on January 12, 2017, after a courageous battle with cancer and pulmonary disease. She was born on July 19, 1924, and was the daughter of the late Dr. John Mac Bell and Annie Powell Bell. She spent her childhood in the Flo Claire neighborhood of Mobile, Alabama.

She graduated with a fine arts bachelor’s degree in speech and drama from Wesleyan College in Macon, Georgia, in 1946. She made her debut and was a member of the Queen’s Court of the Mobile Mardis Gras Court in 1947.

From early childhood on, she aspired to be an actress. She starred in the first play ever produced at the Joe Jefferson Playhouse of Mobile, Angel Street, in 1947, and played many additional roles thereafter, including the role of Eliza Doolitte in Pygmalion, for which she was awarded “best actress.” In 2003, she returned to Joe Jefferson stage for her final role in The Women as the Countess. She was appointed by former Alabama Governor Folsom as a representative of her home State of Alabama to Virginia’s famed Barter Theater in 1950. She was also in supporting and leading roles in theatrical companies, including the Cherry Lane Theater and the Hampton Playhouse of New York City; and Atlanta Children’s Theater and the Theater of the Stars, Atlanta, Georgia, where she toured with Peter Marshal in The Music Man. She appeared in three motion pictures, including Just An Old Sweet Song, with Robert Hooks and Cicely Tyson. She founded the Emily Bell School of Speech, and also taught drama at the Julius T. Wright School for Girls, in Mobile, Alabama, and the Callanwolde Fine Arts Center, of Atlanta, Georgia.

She also was a Mobile radio and television personality. She also held various sales and marketing positions during her life and served in many volunteer and civic roles, including the Junior League of Mobile; the Freedoms Foundation of Valley Forge; and the Colonial Dames of the 17th Century. She also served in various roles for the Methodist Church, including teaching English as a second language.She married and was preceded in death by her husband and former Mayor of Mobile, George Edward McNally, from Chicago, Illinois, in 1956.

She was known for her passion and zest for life, and her unconditional love for her family. She was a true friend. She was eloquent, elegant, charming, a bit flamboyant, and the life of any party. She was a true “southern belle.” Long before the Jimmy Buffet song, she used the phrase “it’s five o’clock somewhere.”

In lieu of flowers, the family suggests donations to the Government Street United Methodist Church of Mobile, Alabama or to the American Cancer Association.

Please express condolences for the family in the comments section below. The McNally family is being cared for by Georgia Funeral Care and Cremation Services, Acworth, Georgia.