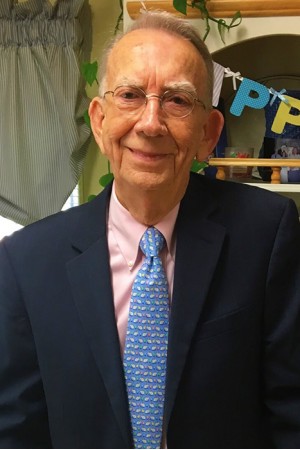 James Freeman Barnes, 84, of Marietta, GA, went home to be with the Lord on October 25, 2020. Mr. Barnes was born on September 8, 1936 in Montgomery, Alabama, to Samuel Thomas Barnes, Jr., and Mary Ella Clark Barnes. His father, Samuel Barnes, was a professional baseball player for the Detroit Tigers and played with Ty Cobb, who visited Jim at the hospital when he was born.

Jim attended Auburn University, where he played on the drumline in the Auburn marching band. He began his career in Louisville, MS, where he was a Jim-of-all-trades: he worked in the printing business at Taylor Machine Works, and later, Spartus Corportion; he managed radio station WLSM; he owned a garden center; was an accomplished landscaper; and served as the director of Chamber of Commerce. Jim moved to Crossett, AR to begin a career with Georgia Pacific. He was promoted to Director of Human Resources and relocated to Atlanta to work at Georgia Pacific Headquarters.  After retirement, he consulted in Human Resources and made many trips to Washington, DC. He took wife Nancy and daughter Teresa on their first trip to see the Nation’s Capital, a memory they will forever cherish.

Jim was a devoted follower of Christ, which influenced every aspect of his life. His gentle spirit, warm smile, and enduring faith in His Savior were the hallmarks of his person.  His integrity, uplifting spirit, and genuine concern for others marked his Christian faith. He was the epitome of a true southern gentlemen.  His dear wife, Nancy, was the light of his life. He treasured his family and made many memories with them on Christmas beach trips and at their home in Marietta.

He was very artistically talented. He enjoyed building birdhouses until the end of his life. You will find many of the birdhouses around the city of Marietta.  He produced 1454 of his most popular design, a replica of The Big Chicken. A self-taught calligrapher, he was an extremely gifted writer and wrote many poems for his Sunday school class at Eastside Baptist Church, in which he was the class president. His Monday night Men’s Bible study was near and dear to his heart and he cherished his time with these Godly men. His life was a living example of his favorite Bible verse, Matthew 18:20: “For where two or three have gathered together in My name, there I am in their midst.”

He was an avid Auburn (War Eagle!) Football fan.  He watched every game Auburn played and kept up with their statistics.  You could find him wearing Auburn orange often, and his home hosts scores of Auburn memorabilia.

He is preceded in death by his son, Bill Barnes, and his brothers Sam Barnes and Don Barnes.  He is survived by his loving wife Nancy, son Jay Barnes of Alpharetta, GA; daughter Teresa Mills of Woodstock, GA; daughter in-law Penny Barnes of Oklahoma City, OK; brother, Bob Barnes of Montgomery, AL; honorary daughter, Joy Rhodes of Marietta, GA; 4 grandchildren, Jon, Joe, Miranda, and Austin; and a host of loving nieces and nephews.

A Celebration of Life will be held at a later date. In lieu of flowers, donations in his memory can be made to the Caring Ministry at Eastside Baptist Church, Marietta, GA or The Gideons International.

Andrea Gehweiler On Oct 29 2020 at 12pm
Nan and Teresa my heart and prayers are with you during this heartbreaking time. Jim’s legacy will live on through the many lives he touched. Heaven is surely a better place with him in it. Reply to this comment
Sonny and Lynn Freeman On Oct 29 2020 at 12pm
When Jim would lead us in prayer, we felt the intimate relationship he shared with his God and then lifted our hearts to share that relationship. We are grateful for having Jim as our friend and always an example of a man who walked humbly and faithfully with our God. Sonny and Lynn Freeman Reply to this comment
Showing 1 to 2 of 2 (1 Pages)