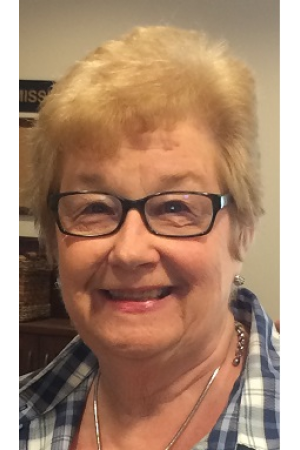 Patricia spent much of her youth in Detroit, attending school, where she played clarinet in the band, and spending summers with the extended family in Madisonville, Kentucky.   She later graduated from Cody High School, going to work as an Executive Admin for the Kresge Company.   In June 1966, she married Michael Johnson.   In 1968, the couple relocated to Atlanta, Georgia, where Patricia became a stay at home mother.  They moved to the suburb of Marietta in 1972 to raise their two children. Patricia was a well-respected member of the community as Captain of her ALTA team, PTA, Garden Club, and Jr ROTC Booster Club President.   She re-entered the workforce teaching at Mt. Bethel and Holy Innocents’.  Deciding to reenter the corporate world in the 1990s she worked for SunTrust Mortgage, Mego Mortgage, Abbott Labs, and Equifax.  She retired from Equifax in 2012.

Patricia attended Sandy Springs Christian Church, helping to build their facilities at Johnson Ferry and Abernathy Roads.   She also taught youth Sunday School and Youth groups. She lent her voice to the choir in the 70s-80s as well. Patricia is preceded in death by her husband of almost 51 years, Michael.  She is survived by son Eric Johnson and his wife, Chanel, grandson Gryffin Johnson, daughter Sheri Mason, and granddaughters Haleigh and Michaela Mason.    Smokey and Maggie, her beloved pets miss her too.

J. Jones On Jan 24 2018 at 4pm
Eric Johnson & Sheri Mason & Family: I am deeply sorry to hear of the passing of your beloved and precious Mother, Mrs. Johnson. At John 11:11 Jesus said Lazarus was sleeping in death. So those who have died are asleep in the grave. John 5:28-29 and Psalms 37:9-11 gives us hope of being reunited with our loved ones following a resurrection on a paradise earth. For more comfort please see www.jw.org. With Sympathy, J. Jones Reply to this comment
Showing 1 to 1 of 1 (1 Pages)