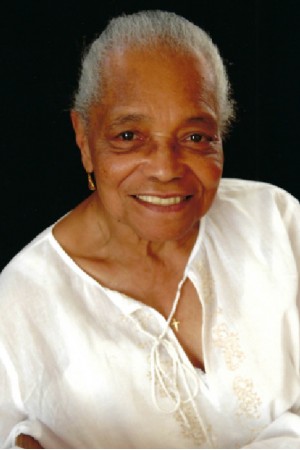 The Reverend Clara Althia Moore Woodson was born to the late James Henry Moore and the late St. Claire Moore at Brooklyn Hospital on April 12, 1927. Mother Clara as she was affectionately and respectfully known was the second born of five. She was the only girl and the apple of her dad’s eye.

Mother Clara grew up in Brooklyn, New York where she attended a primary Sunday School class at James Methodist Episcopal Church. It was here that her dream of becoming a missionary was born.

A few years later, a minister’s wife encouraged Mother Clara to become a teacher and even convinced the church’s Board of Trustees to let Clara, who was only thirteen, teach a Sunday school class on her own. Growing up in a world of segregation and deep prejudice, Clara learned from an early age that the church was her refuge. A place that would teach her the skills needed to excel in her profession as an educator.

Mother Clara went to Brooklyn College at the age of 16. After graduating from college, she became a classroom teacher for the New York City Department of Education, known at that time as the NYC Board of Education. She referred to herself as a lifelong learner and worked to earn two Master’s Degrees in Special Education, and Guidance and Counseling. Mother Clara went on to earn her third; a Master of Divinity, from New Brunswick Theological Seminary. Mother Clara never grew tired of learning, she was always enrolled in some class, seminar, or workshop. She was well into her 70’s when she began working on a Ph.D. and continued until she reached ABD (All But Dissertation) status.

Mother Clara has two scholarships awarded in her name, one presented at a Middle School in Brooklyn and the other at New Brunswick Theological Seminary.

Mother Clara met and married the love of her life, Edwin Woodson, Sr., on Easter Sunday in 1948. For the next 65 years, they observed their anniversary on 2 different days, except on the years the dates overlapped, because he celebrated Easter Sunday and she celebrated March 28th. From this union, six children were born and raised, 4 daughters and 2 sons. Of the six, she was predeceased by two daughters, the late Rev. Phyllis Pearce, the late Dr. Althia Woodson-Robinson. Through the years, she informally adopted countless others who relied on her for motherly advice and Godly wisdom.

Prior to her ordination as a Minister of the Word & Sacrament, Mother Clara served the Reformed Church in America (RCA) as an elder, deacon, and Sunday School teacher, and, during her career, she has been active in assemblies at every level of the RCA She served the Reformed Church Women(RCW) on Classical, Synodical and Denominational levels. She also served on Multiple committees in the RCA including the Christian Action Committee, the Urban Task Force, the General Synod Executive Committee, and the Search Committee for General Secretary. She further accepted leadership roles assisting churches as they transitioned between pastors. She most recently served as a Synod Area Minister on the staff of the New York Synod. Mother Clara was the second African American woman to be ordained in the Reformed Church of America.

Although Mother Clara loved her ministry to others, she deeply loved her growing family. She was affectionately known as Mom, Mother, Grandma, Grammie, Nana, Mother Clara, Sister, Rev. Woodson, and Mrs. Woodson.

Mother Clara was a “Beacon of Light” to all she encountered. She devoted her life to serving others. She often stated, “I have lived long enough to experience healing from many negative, discouraging, and hurtful situations. Through it all, I have been blessed.” The world is a better place because she was here. Clara Althia Moore Woodson will be deeply missed.

Pam Bakker On Nov 28 2022 at 11pm
I just loved this kind servant of God. We crossed paths so many times in Christian education and at NBTS. Traveling to the Netherlands with her family was a real high point. Well done sister. Well done. Reply to this comment
B’dubs On Oct 21 2022 at 6pm
https://www.instagram.com/p/Cj-kSVOPgIB/?igshid=MDJmNzVkMjY= Reply to this comment
B'dubs On Oct 24 2022 at 8am
What a force to be reckoned with. She was never harsh or abrasive. She didn’t swear or threaten but could be clear as crystal, determined as granite, as immovable as the rock of Gibraltar. . She was always kind, saw good in everyone and always could point out the other side of any story she heard. . Her smile was as bright as the sunshine after a cloudy day and that smile adorned her face more often than any other expression. . She was the underdog’s advocate, the lift to the left behind, the voice of the silenced and one who created a path where none existed before. . She was quick witted with wisdom as sharp as a razor and built Maxwell house coffee one cup at a time. . She proved beyond the shadow of any doubt that women’s work and being a domestic were two entirely different things. . She changed the world for the better in many ways, had more children than those who are her biological descendants. . And I am so happy to realize how perfect a mom I had.
Lenore On Oct 21 2022 at 8am
To the most awesome amazing woman I have ever met in my life. I have always loved and admired "Sister" as she was called by her loved ones and friends. Just knowing and loving her to me was an honor. She has enriched my life forever. Love, Lennie Dash Reply to this comment
Debbie Basile On Oct 21 2022 at 8am
I loved Clara and first met her over 20 years ago as we were both involved in the ecumenical Tres Dias community. She faithfully served as spiritual director on many retreats for years. She was always a beacon of light and love and had a feisty manner about her as she’d give a wink and say”Jesus loves me just a little bit more” yet her humble spirit touched people deeply and changed lives. She was the definition of a true Christian woman and I feel blessed and honored to have known her. Well done Clara- good and faithful servant. You are in the arms of your Lord now. What JOY✝️ Reply to this comment
Showing 1 to 4 of 4 (1 Pages)