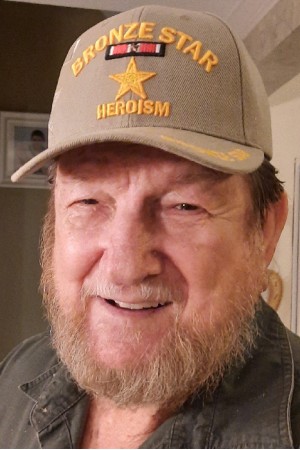 James “Jim” Houston Brasher, 85, passed away on July 5th, 2022 in Marietta, GA. He was born to Connie and Maggie Brasher on November 11th, 1936 in Gibson County, Tennessee. He joined the army at 17 and proudly served his country for 22 years, including one tour in Vietnam and two in Korea, earning two bronze stars and numerous other commendations. He managed the food service cafeteria for the army in Ft. McClellan, AL before and after retiring, and then he worked for 15 years as a general contractor in Augusta, GA. He had numerous hobbies and interests, including shooting clays, hunting, fishing, growing vegetables and fruits, woodworking, building, going to yard sales, cooking country food, and caring for his “little friend” (his dog Rocky). He loved jokes and could often be heard making up songs while going about his business. He was a bull of a man with a booming voice, but he had a tender heart and adored his family. He is preceded in death by his parents, Connie and Maggie Brasher; and his three sisters, Evelyn Duke, Sue Byrd, and Shirley Eubanks. He is survived by his two sisters, Norma Stevens and Willodean Loy; his brother, Stanley Ashcraft; his five children, Patricia Rohr (Don), Donna Jennings (Burt), Connie Halstead (Ken), Sandra Baker, and David Roberts (Alyssa); as well as numerous grandchildren and great-grandchildren. A memorial service will be held at 1:00 PM on July 13th, 2022 at Georgia Funeral Care in Acworth, GA. In lieu of flowers, the family suggests memorial contributions be sent to the US Humane Society, the ASPCA, or the Wounded Warrior Project.