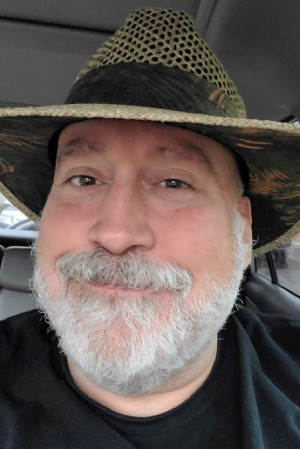 Ronald Edward Reach passed peacefully from this life at his home in Marietta, Georgia on October 10, 2022. He was 55 years old. He is survived by his beloved daughter Kathryn Windsor Reach, his mother Marjorie Barrow Reach, his grandson Asa Bledsoe, brothers Stephen Reach, Robert Reach, David Reach, and Thomas Reach, and numerous sisters-in-law, aunts, uncles, nieces, nephews, cousins, other family members, as well as many valued friends that span the country. Ron was preceded in death by his father Roy Wheeler Reach and his brother Russell Reach.

Ron was born in Sudbury, Massachusetts on August 2, 1967. He was the youngest of 6 sons. In his early years, his family moved between Massachusetts, Florida, Ohio, and Indiana before finally settling in Georgia in 1980. He graduated high school from Lakeview Academy in Gainesville, GA. He then went on to study drama at Florida State and Brenau College for a couple of years.

Ron then studied massage therapy in 1989 at Atlanta School of Massage where he learned Swedish Massage and Deep Tissue Massage. He used these techniques for several years to treat friends and family and to start his business in massage therapy. He graduated from West Georgia State University in 1998 with a BA degree in Psychology with minor studies in Drama and Performing Arts.

In 2001, he went back to massage school at the Rising Spirit Institute in Dunwoody, Georgia, where he learned about Myofascial Release Therapy. He graduated from Rising Spirit in 2002 and obtained licensure in massage therapy shortly thereafter. From 2005 until 2009 Ron studied under John F. Barnes, who developed his own style of Neuromuscular Myofascial Release Therapy techniques. Ron used this specialized training to develop his business, Northside Myofascial Release, in Marietta, GA. Ron continued to utilize these techniques in his practice, helping his clients to improve and resolve their chronic pain and functional impairments.

Ron loved spending time with his daughter and grandson, as well as a great number of friends and family.

Ron valued his close companion Liberty "Libby" Sunshine Daydream, a beautiful Chocolate Labrador Retriever. He had a wide variety of interests and a deep passion for nature, yoga, traveling, cooking, music and entertaining. Ron was known for performing random acts of kindness, helping friends in need, and his love of gifting freely. He spread joy and laughter everywhere he went and left a lasting impression on all those he encountered.

Ron was a true entertainer and comedian. He was an actor for 16 years appearing in many plays, movies, and industrial films. He started playing guitar when he was in his early 30's and his musical style spanned genres such as folk, classic rock, bluegrass, and the blues.

Ron will be lovingly cared for by Georgia Funeral Care in Acworth, Georgia and will be placed to rest at the Honey Creek Woodlands Cemetery in Conyers, Georgia on Friday, October 21st, at 1:00 pm. At this time a green burial and graveside memorial will be conducted, and friends and family are welcome to attend. Ron’s life also will be memorialized by his family in a Celebration of Life at Advent Christian Village in Dowling Park, Florida on Saturday, November 5.

Michelle Zhang On Dec 01 2022 at 10am
Ron was a friend of mine for several years. We went on some adventures together. He is a kind, loving and caring man and I’m heartbroken by his passing. My love and condolences to his family. Reply to this comment
Kathryn Litton On Nov 04 2022 at 9pm
I am so sorry about Ron's passing. His mother is one of my best friends. My heart goes out to you Marjorie Reach. Reply to this comment
David Diaz On Nov 02 2022 at 9pm
Ron was the kindest, most caring friend you could ask for. His quick wit and caring attitude made him a joy. Ron’s thirst for adventure made us quick friends when we first met in ’92. We went to a lot of concerts together and I attended one of his drama performances at West GA. Ron was smitten with Windsor and his pride was always there. Fast forward to the early 2000’s-my wife and I moved to Marietta. Ron was living in Roswell while creating his Massage Therapy career. Lisa got several massages from Ron. When Lisa and I moved to Louisville, KY two years ago, I stayed in constant contact with Ron about music, politics and daily life. In March of this year, Ron & Libby came to Louisville for a visit. Ron and I went to a Beatles festival on the river. We just hung out and enjoying each other’s company. His larger-than-life belly laughs always bring a smile to my face. Ron will always hold a special place in my heart. Fare thee well my friend. Reply to this comment
Jeremiah Cook On Nov 02 2022 at 11am
Ron was a steady light at events around the Atlanta and surrounding area music scene. I just learned much from reading his bio, but what I did know, he had the biggest heart and a driving spirit! He’ll be sorely missed by me and my musical family! See you soon friend! Reply to this comment
Jessica Parker On Nov 01 2022 at 4pm
Ron was so sweet to me and so supportive. I remember Ron reaching out a time or two because he was concerned. And he always injected his own wonderful flavor of humor. I was shocked to hear the sad news of his passing. I know he will be missed by everyone who knew him. Reply to this comment
Showing 1 to 5 of 5 (1 Pages)