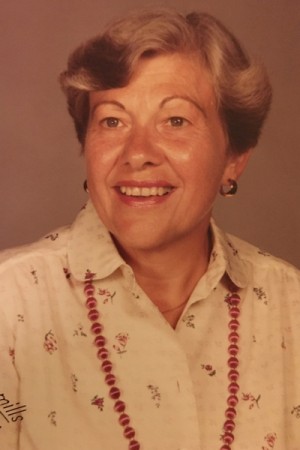 Patricia E. Bibler was born in Quincy, IL on March 7, 1927, and entered into the arms of her Savior and Lord Jesus on July 25, 2020 in Kennesaw, GA, 16 days after the death of her beloved husband Joe. She was the second of three daughters born to Harry and Helen Hauter and lived in Quincy until attending and graduating from Valparaiso University, where she received her BA. That’s also where she met Joseph Bibler on a blind date. The two were married on August 21, 1948, their marriage lasted for almost 72 years until Joe’s passing on July 9th. It was said that they were like ‘P and J’ sandwiches, you couldn’t think of one of them without the other, and they were held together by Jesus, the Bread of Life.

Pat taught high school math in Portage in the early years of their marriage, and later devoted herself exclusively to being a helpmate to Joe and involved mother to their 3 children. Soon after Joe’s retirement in 1986 from Northern Indiana Bank and Company, they moved to Sun Lakes, AZ where they enjoyed playing golf, bridge, euchre, traveling throughout the Southwest, and socializing with both old and new friends. Pat was involved in several ministries at their church, Risen Savior Lutheran Church of Chandler, AZ, most noteworthy heading up the assembling of Braille Bibles sent to the blind throughout the world.

Pat was a very intelligent, highly principled woman who always lived a life aligned with her convictions which were rooted and grounded in her strong faith in the Lord. Her friends remember her as an encourager who wore a smile and demonstrated genuine interest in them. Pat was also known for her competitiveness and sharp skills in many arenas— from ping pong and croquet to bridge, euchre, and cribbage, the latter of which she and Joe played almost daily and kept an ongoing tally for years. She was also a passionate St. Louis Cardinals’ baseball fan.  Besides her faith in Jesus, she was most passionate about her family, whom she loved dearly and prayed for faithfully, remembering everyone’s birthday and anniversaries with a handwritten, encouraging note, often sending newspaper clippings that she thought would be of interest to them. She has left a tremendous legacy of faith and love to her family, including her son Jeff Bibler (Chris) of Houston, TX; daughter Amy Barton (Ken) of Monroe, MI; and daughter Julie Van Gorp (Craig) of Marietta, GA; her 12 grandchildren; her19 great grandchildren; and her 1 great great grandchild, all of whom survive her. She is also survived by her sister Shirley Brinkmeyer of Quincy, Illinois.

A Memorial Service is being held August 9th at 2:00 p.m. at the Georgia Funeral Care Home in Acworth, GA. Memorial gifts may be sent to Lutheran Braille Workers, P.O. Box 5000, Yucaipa, CA. 92399

Pat and Nancy Murphy On Aug 06 2020 at 8am
We send our deepest sympathy to all of Pat and Joe’s Family. We have fond memories of both of them. After 25 years at 2403 Shannon, we decided to downsize to a one story home about a mile away. There were still memories of them in the house while we were there. Cherish your many memories of your blessed parents. Reply to this comment
Elizabeth Tollefsen On Aug 05 2020 at 4pm
We were so sorry to hear of Pat passing away, shortly after her husband, Joe, passed away. We are members of Risen Savior Lutheran Church in Chandler, AZ, and that is how we met them. They both are wonderful Christian people. We met them shortly after we started "wintering" in Arizona. We were in a Bridge group with them for several years. In fact, Pat, was the person who got the group together in the first place. Our deepest sympathy to all the family. We will miss them both very much! Reply to this comment
Showing 1 to 2 of 2 (1 Pages)