Arthur (Ron) Adams was born in Savannah, GA in 1938. He died as he lived as he was surrounded in life and death by people he loved.

One of the highlights of his life was when he had batting lessons from Hank Aaron as a child while working at the baseball stadium in Savannah, GA. Often described as the biggest Braves fan in the world, he got to see his favorite team win the World Series one last time.

His resume includes working in Washington, DC with the F.B.I. He then worked in the banking industry, real estate sales, and development, and he was the Executive Vice President of The International Picture Show Company, Georgia’s first movie business. He was genuinely interested in people and their stories, and this sincere, compassionate curiosity made him excellent in sales.

Ron volunteered his time working as President of the Young Democrats of Georgia. He was the first to greet President Lyndon Johnson off of Air Force One when he visited Georgia. He was active serving youth as a community coach, and he served as Scout Master for the Boy Scouts of America. He was an active member of his church.

Ron is now in heaven with his beautiful bride, love of his life, wife of nearly 50 years, Georganna, and he is survived by his three children, daughter Allison Lanning (Brad), son Richard Christopher Adams and daughter Julie Poteet; six grandchildren—Samantha Lanning, Nicholas Lanning, Nicole Duncan (Ross), Allison Adams, Adam Poteet, and Jonathan Poteet. He is also survived by his brother Lloyd Adams and sisters Barbara Rauker and Lynda Wright and many much-loved nieces and nephews.

Dad's service will be Sunday, 8/14, at 2 pm, at The Church of Jesus Christ of Latter Day Saints, 870 Peeples Valley Rd., Cartersville. Following the service will be a celebration of life at Julie’s house and directions will be at the church.

Dad had a lifelong love and commitment to the Boy Scouts of America and helped several scouts obtain the rank of Eagle including his beloved grandson Adam Poteet and nephew Graeme Adams. Adam’s Eagle project was building a playground in Guatemala through Hearts for the Children Ministry working with their scout troop. In lieu of flowers, donations can be made to www.Heartsforthechildren.org, and using project number 102-2047 will ensure donations go to that troop. 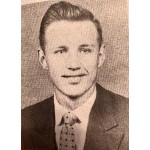