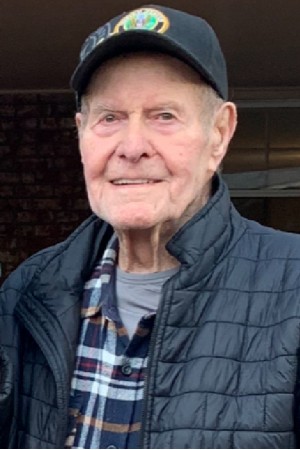 David McCaw, 95, of Cartersville, Georgia, passed away peacefully on July 10th, 2022, at home with his grandson David R McCaw and his grandson's wife Elizabeth.

He was preceded in death by his wife Enid and their son David McCaw Jr. He is survived by daughters Linda, Diane, and Shannon; and sons Albert “Buddy”, Randal, and Mark; as well as a host of grandchildren and great-grandchildren.

David was born to parents Manuel and Callie McCaw, on December 5th, 1926, in Mt. Vernon, Kentucky.

At the age of 17, David enlisted in the United States Army and served honorably during World War II. As a soldier in the 79th division, he saw action and served with distinction across Normandy and into the Rhineland.

He also served in the United States Air Force, stationed in Japan.

After his military service, David married Enid, his wife of 60 years, in 1949. They eventually settled in Winchendon, Massachusetts. He worked for 36 years as a millwright and maintenance superintendent at the Seaman Paper Mill in Otter River. The couple retired to Florida and eventually moved to Georgia.

David actively spent his time in Georgia tending to his lawn and garden while looking forward to family visits and gatherings. He was always eager to lend a helping hand. Often saying, “there's no job I haven't done and no job I can't do”.

David McCaw was known to gratefully express, in a cheerful tone, that he had lived a full life and was comforted by the fact that he had done so.

The memorial service will be held at a later date to be announced.