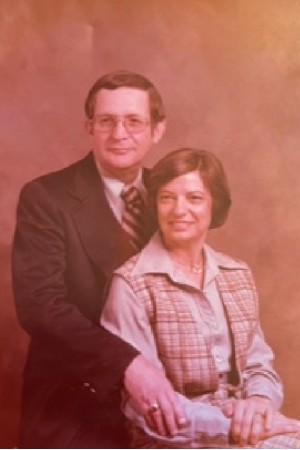 Florence Elizabeth Brown was born to Grady and Laura Murphy on a farm near West Blocton, Alabama in October 1930. The closest business establishment was a gas station located at Frog Level, Alabama. She was the seventh of nine children, five boys and four girls. Florence was raised on a  self-sufficient farm that provided everything needed with the exception of finished metal goods, shoes, and gasoline. She and her siblings picked cotton, worked in the fields, milked cows, fed the livestock, and churned butter. Florence joined the Mount Moriah 1st Baptist Church as a  child and was baptized in a creek that flowed through the family farm. She later joined the 1st Baptist Church of West Blocton and after marriage a number of Presbyterian churches. She married Alvin Brown in Birmingham, Alabama in  September 1951. Her silk wedding dress was sewn out of an Army parachute by her sisters. Alvin had served in the 82nd Airborne Division and supplied the parachute. The Birmingham Post Herald newspaper carried the story with a picture of Florence in her wedding dress.

Alvin’s career with Sears took Florence on a remarkable journey. After their first home in  Birmingham, Alabama she lived in Memphis, Tennessee (saw Elvis Presley on a motorcycle at a traffic light), Greenville, Mississippi, back to Memphis, Montgomery, Alabama, San Juan,  Puerto Rico, Whittier, California, Mountain View, California, Edmonds, Washington,  Minneapolis, Minnesota and to retirement in Gulf Breeze, Florida. She made it a long way from  West Blocton.

Florence enjoyed traveling and collecting items from the many places she lived and visited,  especially Puerto Rico and the US Virgin Islands. She also had a great sense of humor and participated in many of the pranks instigated by Alvin.

In their later years, Alvin and Florence moved to Canton, Georgia to be near family. After Alvin passed away in 2013 Florence resided in the Merrill Gardens Assisted Living Apartments in  Woodstock, Georgia.

After a brief illness, Florence passed away on February 7, 2022. She will be buried with her husband, Alvin, at the Georgia National Cemetery located in Canton, Georgia on February 28 at  1:30 PM Eastern time. The funeral service will be held in an open-air pavilion at the cemetery.

In lieu of flowers, the family suggests that contributions be made through East Cobb  Presbyterian Church to Equipping Leaders International, for the account of Francois and Lisa  Longeiret or the Embrace Grace Ministry. The website is eastcobbpres.org.

Frances.Murphy Hobdy On Feb 15 2022 at 5pm
Loved my sister and praying for comfort to all who loved her. Reply to this comment
Jason Freeman On Feb 15 2022 at 5pm
Florence was an amazing woman, and person! I’m very glad that I got to enjoy her company and that I got to know her and her family as well as I do! I was lucky enough to marry into this family and not a day goes by that I don’t appreciate what Florence and her family have done for me! Florence u will b missed, Big Al has been waiting on u and now you’re joined again! Rest peacefully! Jason Freeman Reply to this comment
Showing 1 to 2 of 2 (1 Pages)